I feel cold all the time.

When I was younger, I was always hot. I needed to be in air conditioning everywhere I went. I could never get the temperature cold enough. But now that I am older, I feel like a frail person who is always chilled, needing to drape myself with a blanket to keep warm.

Nevertheless, like all human beings, I am still warm-blooded. I am an endotherm, as are all mammals and birds.

Though biologists have tried to account for endothermy, no model has adequately explained why birds and mammals are warm-blooded. The advantages of being warm-blooded over being cold-blooded have not seemed to adequately outweigh costs—until now.

Recently, a biologist from the University of Nevada, Reno, Michael L. Logan, published a model that helps make sense of this enigma.1 His work evokes the optimal design and elegant rationale for endothermy in birds and mammals—and ectothermy in amphibians and reptiles.

An Explanation for Endothermy

For endothermy to exist, it must confer some significant advantage for animals’ constant, elevated body temperatures.

In other words, the fever response plays a critical role when animals battle infectious agents. And warm-blooded animals have the advantage of possessing body temperatures close to ideal.

A body of evidence indicates that the immune system’s components display temperature-dependent changes in activity. As it turns out, fever optimizes immune system function by: 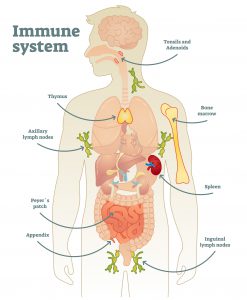 Here’s the key point: the metabolic costs of endothermy are justified because warm-bloodedness allows the immune systems of birds and mammals to be near enough to the temperature optimum that infectious agents can be quickly cleared from their bodies.

Finally, in an attempt to elevate their body temperatures, ectotherms need to be out from under cover, making themselves vulnerable to predators. So, according to Logan’s model, endothermy offers some tangible advantages compared to ectothermy.

So, when it comes to regulation of animal body temperature, a set of trade-offs exists that include:

These trade-offs can be managed by two viable strategies: endothermy and ectothermy. Each has advantages and disadvantages. And each is optimized in its own right.

Regulation of Body Temperature and the Case for a Creator

Logan seeks to account for the evolutionary origins of endothermy by appealing to the advantages it offers organisms battling pathogens. But, examining Logan’s scenario leaves one feeling as if the explanation is little more than an evolutionary just-so story.

When endothermy presented an enigma for biologists, it would have been hard to argue that it reflected the handiwork of a Creator, particularly in light of its large metabolic cost. But now that scientists understand the trade-offs in play and the optimization associated with the endothermic lifestyle, we can also interpret the optimization of endothermy and ectothermy as evidence for design.

From my vantage point, optimization signifies the handiwork of a Creator. As I discuss in The Cell’s Design, saying something is optimized is equivalent to saying it is well-designed. The optimization of an engineered system doesn’t just happen. Rather, such systems require forethought, planning, and careful attention to detail. In the same way, the optimized designs of biological systems like endothermy and ectothermy reasonably point to the work of a Creator.

And I am chill with that.