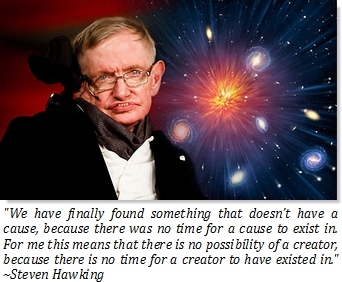 I remember reading a science news article quite awhile back, wherein the late astrophysicist Stephen Hawking was giving some finalized theories regarding our universe and a creator in his farewell book, “Brief Answers to Big Questions.” I used to just take for granted that Hawking was on the same level of genius with Einstein, due mainly to his notoriety on the subject of black holes, quantum physics and theories on the nature of, and beginning of the universe, together with accolades and a seemingly endless list of awards, but I dropped that meteorite real fast when one of his last opines collided head on with an asteroid at 186,000 miles per second.

You don’t even have to believe in God to perceive that there is something really wobbly with such a simplified, foregone conclusion. Even Einstein held to a pantheistic concept of an impersonal creative entity. Hawking was stating with all confidence, that God cannot exist because before the Big Bang there was no linear time in which anything could be the cause of anything, therefore, neither could there be a higher consciousness to choose to cause something. Whoa Nelly! What the hey kind of epiphany was that utterance? He certainly wasn’t giving any creed to all the possibilities when he dictated that one over his synthesizer.

He addressed the God issue with the near imbecilic assumption that linear time would have been necessary before the Big Bang in order for there to be any possibility of the existence of God, or perhaps more to the point, a ‘time out of time’. He completely excluded the plausibility that there may be a God residing in a higher non-physical, non-decaying and timeless dimension far outside the creation event, or that sudden spark of light and explosion of everything from nothing, commonly referred to as the Big Bang, or as I prefer to call it, the “Let there be light” event.

Why that makes about as much sense as saying, “I was just about to make you pancakes for breakfast this morning, but unfortunately I didn’t exist because I wasn’t able to be standing outside the factory just before they made the Bisquick box, so now there aren’t any pancakes. So why don’t you go back to bed, and then come back out here after awhile, and see if any pancakes have shown up. You never know, I might spontaneously exist inside the box, and then, there they’ll be… all nice and fluffy and golden brown, with butter and syrup already on them! Stranger things have happened I’m sure.”

The whole concept there Stephen, is that an extremely powerful Entity with a grand idea, chooses to create a dimension of both physical matter and continuously expanding movement of said matter, including those speedy little photons shooting out from the stars which is what we like to measure the speed thereof and refer to the results as time. The Entity itself is not a part of Its newly created dimension, anymore than you are a part of your scooter, which will probably now be enshrined in a prominent place at The Cambridge University.

Space-time is an inescapable part of our expanding universe and is not a requirement nor even a probability in the absence of white hot glowing matter, outside of it, regardless of what other non-physical dimensions lie beyond its edges. I cannot help but shake my head at Hawking’s final conclusion on the subject of God, because the one thing he came close to being right on, is that God really cannot be a part of time, which is solely an attribute of the cosmos that He Himself made. So what was someone evidently putting in his daily nourishment, that would have given him cause to believe that a Creator cannot exist just outside the boundary of the universe where there is no space-time occurring, when he made such a peculiar statement? As a theoretical physicist, it should have at least occurred to him that an all powerful Creator would have absolutely no need of the internal movement of star light or the passing of sand in the hourglass that we experience within this defined temporal realm. God does exist where there is no time. He conceived time. It’s His baby, just like His concept of the blood pumping through our veins or the water drawn through the capillaries of every leaf on every one of His trees. He thought it all up… He’s not part of it.

There was an earlier time when Hawking was a bit more open to the idea that there may in fact be a God. In his book ‘A Brief History of Time’ he wrote, “Is the unified theory so compelling that it brings about its own existence?” Sometime after that book was published, while spending time with mathematical physicist Neil Turok, both men came to an agreement that a Creator was quite compatible with an open universe. So what happened that would ultimately close the door on the idea of a purposed universe? Perhaps one reason for his eventual atheistic view could have been that he had become set against a perceived cruel God for a lifetime of imprisonment in a non-responsive body, which would be more than understandable. However, there being no apparent public record of him saying such, it’s purely speculation on my part. Actually, that’s not at true. My wife told me to include it here as a paragraph. There… Happy now?

At any rate, I would have thought that he would have been more of an outside the box thinker, but I guess his reasoning got too close to the event horizon and he got sucked into a black hole at the finale. Well, I must say, that was a pretty dismal belief system to wrap up one’s last days on Earth with, but as for myself, I believe I’ll adhere to a grander and much more outside the box hypothesis. All the way to the last breath.

So long Stephen. Maybe I’ll see you sometime… out of time… or not…