It goes without saying that cancer is an insidious disease. People who get cancer often die way too early. And even though a cancer diagnosis is no longer an immediate death sentence—thanks to biomedical advances—there are still many forms of cancer that are difficult to manage, let alone effectively treat.

Cancer also causes quite a bit of consternation for those of us who use insights from science to make a case for a Creator. From my vantage point, one of the most compelling reasons to think that a Creator exists and played a role in the origin and design of life is the elegant, sophisticated, and ingenious designs of biochemical systems. And yet, when I share this evidence with skeptics—and even seekers—I am often met with resistance in the form of the question: What about cancer?

Why Would God Create a World Where Cancer Is Possible?

In effect, this question typifies one of the most common—and significant—objections to the design argument. If a Creator is responsible for the designs found in biochemistry, then why are so many biochemical systems seemingly flawed, inelegant, and poorly designed?

The challenge cancer presents for the design argument carries an added punch. It’s one thing to cite inefficiency of protein synthesis or the error-prone nature of the rubisco enzyme, but it’s quite another to describe the suffering of a loved one who died from cancer. There’s an emotional weight to the objection. These deaths feel horribly unjust.

Couldn’t a Creator design biochemistry so that a disease as horrific as cancer would never be possible—particularly if this Creator is all-powerful, all-knowing, and all-good?

I think it’s possible to present a good answer to the challenge that cancer (and other so-called bad designs) poses for the design argument. Recent insights published by a research duo from Cambridge University in the UK help make the case.1

A Response to the Bad Designs in Biochemistry and Biology

Because the “bad designs” challenge is so significant (and so frequently expressed), I devoted an entire chapter in The Cell’s Design to addressing the apparent imperfections of biochemical systems. My goal in that chapter was to erect a framework that comprehensively addresses this pervasive problem for the design argument.

In the face of this challenge it is important to recognize that many so-called biochemical flaws are not genuine flaws at all. Instead, they arise as the consequences of trade-offs. In their cellular roles, many biochemical systems face two (or more) competing objectives. Effectively managing these opposing objectives means that it is impossible for every aspect of the system to perform at an optimal level. Some features must be carefully rendered suboptimal to ensure that the overall system performs robustly under a wide range of conditions.

Cancer falls into this category. It is not a consequence of flawed biochemical designs. Instead, cancer reflects a trade-off between DNA repair and cell survival.

The etiology (cause) of most cancers is complex. While about 10 percent of cancers have a hereditary basis, the vast proportion results from mutations to DNA caused by environmental factors.

Some of the damage to DNA stems from endogenous (internal) factors, such as water and oxygen in the cell. These materials cause hydrolysis and oxidative damage to DNA, respectively. Both types of damage can introduce mutations into this biomolecule. Exogenous chemicals (genotoxins) from the environment can also interact with DNA and cause damage leading to mutations. So does exposure to ultraviolet radiation and radioactivity from the environment. 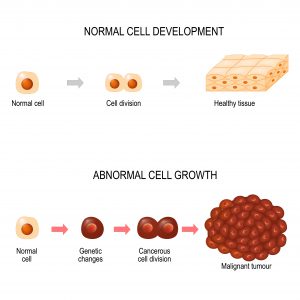 In effect, DNA mutations are an inevitable consequence of the laws of nature, specifically the first and second laws of thermodynamics. These laws make possible the chemical structures and operations necessary for life to even exist. But, as a consequence, these same life-giving laws also undergird chemical and physical processes that damage DNA.

Fortunately, cells have the capacity to detect and repair damage to DNA. These DNA repair pathways are elaborate and sophisticated. They are the type of biochemical features that seem to support the case for a Creator. DNA repair pathways counteract the deleterious effects of DNA mutation by correcting the damage and preventing the onset of cancer.

Unfortunately, these DNA repair processes function incompletely. They fail to fully compensate for all of the damage that occurs to DNA. Consequently, over time, mutations accrue in DNA, leading to the onset of cancer. The inability of the cell’s machinery to repair all of the mutation-causing DNA damage and, ultimately, protect humans (and other animals) from cancer is precisely the thing that skeptics and seekers alike point to as evidence that counts against intelligent design.

Why would a Creator make a world where cancer is possible and then design cancer-preventing processes that are only partially effective?

Cancer: The Result of a Trade-Off

Even though mutations to DNA cause cancer, it is rare that a single mutation leads to the formation of a malignant cell type and, subsequently, tumor growth. Biomedical researchers have discovered that the onset of cancer involves a series of mutations to highly specific genes (dubbed cancer genes). The mutations that cause cells to transform into cancer cells are referred to as driver mutations. Researchers have also learned that most cells in the body harbor a vast number of mutations that have little or no biological consequence. These mutations are called passenger mutations. As it turns out, there are thousands of passenger mutations in a typical cancer cell and only about ten driver mutations to so-called cancer genes. Biomedical investigators have also learned that many normal cells harbor both passenger and driver mutations without ever transforming. (It appears that other factors unrelated to DNA mutation play a role in causing a cancer cell to undergo extensive clonal expansion, leading to the formation of a tumor.)

What this means is that mutations to DNA are quite extensive, even in normal, healthy cells. But this factor prompts the question: Why is the DNA repair process so lackluster?

The research duo from Cambridge University speculate that DNA repair is so costly to cells—making extensive use of energy and cell resources—that to maintain pristine genomes would compromise cell survival. These researchers conclude that “DNA quality control pathways are fully functional but naturally permissive of mutagenesis even in normal cells.”2 And, it seems as if the permissiveness of the DNA repair processes generally have little consequence given that a vast proportion of the human genome consists of noncoding DNA.

Biomedical researchers have uncovered another interesting feature about the DNA repair processes. The processes are “biased,” with repairs taking place preferentially on the DNA strand (of the double helix) that codes for proteins and, hence, is transcribed. In other words, when DNA repair takes place it occurs where it counts the most. This bias displays an elegant molecular logic and rationale, strengthening the case for design.

Given that driver mutations are not in and of themselves sufficient to lead to tumor formation, the researchers conclude that cancer prevention pathways are quite impressive in the human body. They conclude, “Considering that an adult human has ~30 trillion cells, and only one cell develops into a cancer, human cells are remarkably robust at preventing cancer.”3

So, what about cancer?

Though cancer ravages the lives of so many people, it is not because of poorly designed, substandard biochemical systems. Given that we live in a universe that conforms to the laws of thermodynamics, cancer is inevitable. Despite this inevitability, organisms are designed to effectively ward off cancer.

Ironically, as we gain a better understanding of the process of oncogenesis (the development of tumors), we are uncovering more—not less—evidence for the remarkably elegant and ingenious designs of biochemical systems.

The insights by the research team from Cambridge University provide us with a cautionary lesson. We are often quick to declare a biochemical (or biological) feature as poorly designed based on incomplete understanding of the system. Yet, inevitably, as we learn more about the system we discover an exquisite rationale for why things are the way they are. Such knowledge is consistent with the idea that these systems stem from a Creator’s handiwork.

Still, this recognition does little to dampen the fear and frustration associated with a cancer diagnosis and the pain and suffering experienced by those who battle cancer (and their loved ones who stand on the sidelines watching the fight take place). But, whether we are a skeptic or a believer, we all should be encouraged by the latest insights developed by the Cambridge researchers. The more we understand about the cause and progression of cancers, the closer we are to one day finding cures to a disease that takes so much from us.

We can also take added encouragement from the powerful scientific case for a Creator’s existence. The Old and New Testaments teach us that the Creator revealed by scientific discovery has suffered on our behalf and will suffer alongside us—in the person of Christ—as we walk through the difficult circumstances of life.

Evidence that Nonfunctional DNA Serves as a Mutational Buffer