My family’s TV viewing habits have changed quite a bit over the years. It doesn’t seem that long ago that we would gather around the TV, each week at the exact same time, to watch an episode of our favorite show, broadcast live by one of the TV networks. In those days, we had no choice but to wait another week for the next installment in the series.

Now, thanks to the availability of streaming services, my wife and I find ourselves binge-watching our favorite TV programs from beginning to end, in one sitting. I’m almost embarrassed to admit this, but we rarely sit down to watch TV with the idea that we are going to binge watch an entire season at a time. Usually, we just intend to take a break and watch a single episode of our favorite program before we get back to our day. Inevitably, however, we find ourselves so caught up with the show we are watching that we end up viewing one episode after another, after another, as the hours of our day melt away.

One program we couldn’t stop watching was Money Heist (available through Netflix). This Spanish TV series is a crime drama that was originally intended to span two seasons. (Because of its popularity, Netflix ordered two more seasons.) Money Heist revolves around a group of robbers led by a brilliant strategist called the Professor. The Professor and his brother nicknamed Berlin devise an ambitious, audacious plan to take control of the Royal Mint of Spain in order to print and then escape with 2.5 billion euros.

Because their plan is so elaborate, it takes the team of robbers five months to prepare for their multi-day takeover of the Royal Mint. As you might imagine, their scheme consists of a sequence of ingenious, well-timed, and difficult-to-execute steps requiring everything to come together in the just-right way for their plan to succeed and for the robbers to make it out of the mint with a treasure trove of cash.

Recently a team of paleontologists uncovered their own treasure trove—a haul of soft tissue materials from the 75-million-year-old fossilized skull fragments of a juvenile duck-billed dinosaur (Hypacrosaurus stebingeri).1 Included in this cache of soft tissue materials were the remnants of the dinosaur’s original DNA—the ultimate paleontological treasure. What a steal!

This surprising discovery has people asking: How is possible that DNA could survive for that long a period of time?

Common wisdom states that DNA shouldn’t survive for more than 1 million years, much less 75 million. Thus, young-earth creationists (YECs) claim that this soft-tissue discovery provides the most compelling reason to think that the earth is young and that the fossil record resulted from a catastrophic global deluge (Noah’s flood).

But is their claim valid?

Hardly. The team that made the soft-tissue discovery propose a set of mechanisms and processes that could enable DNA to survive for 75 million years. All it takes is the just-right set of conditions and a sequence of well-timed, just-right events all coming together in the just-right way and DNA will persist in fossil remains.

The team of paleontologists who made this discovery—co-led by Mary Schweitzer at North Carolina State University and Alida M. Bailleul of the Chinese Academy of Sciences—unwittingly stumbled upon these DNA remnants as part of another study. They were investigating pieces of fossilized skull and leg fragments of a juvenile Hypacrosaurus recovered from a nesting site. Because of the dinosaur’s young age, the researchers hoped to extend the current understanding of dinosaur growth by carrying out a detailed microscopic characterization of these fossil pieces. In one of the skull fragments they observed well-defined and well-preserved calcified cartilage that was part of a growth plate when the juvenile was alive.

A growth plate is a region in a growing skeleton where bone replaces cartilage. At this chondro-osseous junction, chondrocytes (cells found in cartilage) can be found within lacunae (spaces in the matrix of bone tissues). Here, chondrocyte cells secrete an extracellular matrix made up of type II collagen and glucosamine glycans. These cells rapidly divide and grow (a condition called hypertrophy). Eventually, the cells die, leaving the lacunae empty. Afterwards, bone fills in the cavities.

The team of paleontologists detected lacunae in the translucent, well-preserved cartilage of the dinosaur skull fragment. A more careful examination of the spaces revealed several cell-like structures sharing the same lacunae. The team interpreted these cell-like structures as the remnants of chondrocytes. In some instances, the cell-like structures appeared to be doublets, presumably resulting from the final stages of cell division. In the doublets, they observed darker regions that appeared to be the remnants of nuclei and, within the nuclei, dark colored materials that were elongated and aligned to mirror each other. They interpreted these features as the leftover remnants of chromosomes, which would form condensed structure during the later stages of cell division.

Given the remarkable degree of preservation, the investigators wondered if any biomolecular remnants persisted within these microscopic structures. To test this idea, they exposed a piece of the fossil to Alcian blue, a dye that stains cartilage of extant animals. The fact that the fossilized cartilage picked up the stain indicated to the research team that soft tissue materials still persisted in the fossils.

Using an antibody binding assay (an analytic test), the research team detected the remnants of collagen II in the lacunae. Moreover, as a scientific first, the researchers isolated the cell-like remnants of the original chondrocytes. Exposing the chondrocyte remnants to two different dyes (PI and DAPI) produced staining in the cell interior near the nuclei. These two dyes both intercalate between the base pairs that form DNA’s interior region. This step indicated the presence of DNA remnants in the fossils, specifically in the dark regions that appear to be the nuclei.

Implications of This Find

This discovery adds to the excitement of previous studies that describe soft tissue remnants in fossils. These types of finds are money for paleontologists because they open up new windows into the biology of extinct life. According to Bailleul:

“These exciting results add to growing evidence that cells and some of their biomolecules can persist in deep-time. They suggest DNA can preserve for tens of millions of years, and we hope that this study will encourage scientists working on ancient DNA to push current limits and to use new methodology in order to reveal all the unknown molecular secrets that ancient tissues have.”2

Those molecular secrets are even more exciting and surprising for paleontologists because kinetic and modeling studies indicate that DNA should have completely degraded within the span of 1 million years.

The surprising persistence of DNA in the dinosaur fossil remains is like bars of gold for YECs and they don’t want to hoard these treasure for themselves. YECs assert that this find is the “last straw” for the notion of deep time (the view that Earth is 4.5 billion years old and life has existed on it for upwards of 3.8 billion years). For example, YEC author David Coppedge insists that “something has to give. Either DNA can last that long, or dinosaur bones are not that old.”3 He goes on to remind us that “creation research has shown that there are strict upper limits on the survival of DNA. It cannot be tens of millions of years old.”4 For YECs, this type of discovery becomes prima facia evidence that the fossil record must be the result of a global flood that occurred only a few thousand years ago.

Yet, in my book Dinosaur Blood and the Age of the Earth, I explain why there is absolutely no reason to think that the radiometric dating techniques used to determine the ages of geological formations and fossils are unreliable. The certainty of radiometric dating methods means that there must be mechanisms that work together to promote DNA’s survival in fossil remains. Fortunately, we don’t have to wait for the next season of our favorite program to be released by Netflix to learn what those mechanisms and processes might be. 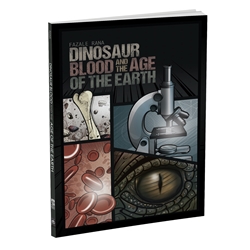 Even though common wisdom says that DNA can’t survive for tens of millions of years, a word of caution is in order. When I worked in R&D for a Fortune 500 company, I participated in a number of stability studies. I quickly learned an important lesson: the stability of chemical compounds can’t be predicted. The stability profile for a material only applies to the specific set of conditions used in the study. Under a different set of conditions chemical stability can vary quite extensively, even if the conditions differ only slightly from the ones employed in the study.

So, even though researchers have performed kinetic and modeling studies on DNA during fossilization, it’s best to exercise caution before we apply them to the Hypacrosaurus fossils. To say it differently, the only way to know what the DNA stability profile should be in the Hypacrosaurus fragments is to study it under the precise set of taphonomic (burial, decay, preservation) conditions that led to fossilization. And, of course, this type of study isn’t realistic.

This limitation doesn’t mean that we can’t produce a plausible explanation for DNA’s survival for 75 million years in the Hypacrosaurus fossil fragments. Here are some clues as to why and how DNA persisted in the young dinosaur’s remains:

The dyes used to detect DNA can bind to double-stranded regions of DNA that are only six base pairs in length. Again, this feature means that the dye molecules will as readily intercalate between the bases of intact DNA molecules as relatively small fragments derived from the original material.

In the later stage of cell division, chromosomes (which consist of DNA and proteins) exist in a highly compact, condensed phase. In this phase, chromosomal DNA would be protected and much more resistant to chemical breakdown than if the chromosomes existed in a more diffuse state, as is the case in other stages of the cell cycle.

In other words, a confluence of factors worked together to promote a set of conditions that allows small pieces of collagen II and DNA to survive long enough for these materials to become entombed within a mineral encasement. At this point in the preservation process, the materials can survive for indefinite periods of time.

Nevertheless, some people find it easier to believe that a team of robbers could walk out of the Royal Mint of Spain with 2.5 billion euros than to think that DNA could persist in 75-million-year-old fossils. Their disbelief causes them to question the concept of deep time. Yet, it is possible to devise a scientifically plausible scheme to explain DNA’s survival for tens of millions of years, if several factors all work together in the just-right way. This appears to be the case for the duck-billed dinosaur specimen characterized by Schweitzer and Bailleul’s team.

As this latest study demonstrates, if the just-right sequence of events occurs in the just-right way with the just-right timing, scientists have the opportunity to walk out of the fossil record vault with the paleontological steal of the century.

It is exciting to think that more discoveries of this type are just around the corner. Stay tuned!

Recovery of a Wide Range of Soft Tissue Materials in Fossils

Detection of Carbon-14 in Fossils