Comic books intrigue me. They are a powerful storytelling vehicle. The combination of snapshot-style imagery, along with narration and dialogue, allows the writer and artist to depict action and emotion in a way that isn’t possible using the written word alone. Comic books make it easy to depict imaginary worlds. And unlike film, comics engage the reader in a deeper, more personal way. The snapshot format requires the reader to make use of their imagination to fill in the missing details. In this sense, the reader becomes an active participant in the storytelling process. 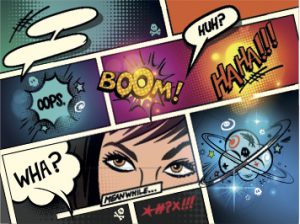 In America, comics burst onto the scene in the 1930s, but the oldest comics (at least in Europe) trace their genesis to Rodolphe Töpffer (1799-1846). Considered by many to be “the father of comics,” Töpffer was a Swiss teacher, artist, and author who became well-known for his illustrated books—works that bore similarity to modern-day comics. 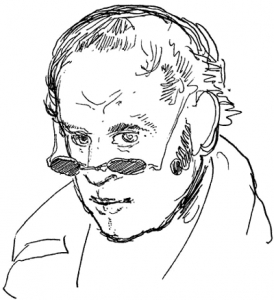 Despite his renown, Töpffer wasn’t the first comic book writer and artist. That claim to fame belongs to long forgotten artists from prehistory. In fact, recent work by Australian and Indonesian researchers indicates that comics as a storytelling device dates to earlier than 44,000 years ago.

These investigators discovered and characterized cave art from a site on the Indonesian island of Sulawesi that depicts a pig and buffalo hunt. Researchers interpret this mural to be the oldest known recorded story1 —a comic book story on a cave wall.

This find, and others like it, provide important insight into our origins as human beings. From my perspective as a Christian apologist, this discovery is important for another reason. I see it as affirming the biblical teaching about humanity: God made human beings in his image.

Leading up to this discovery, archeologists had already identified and dated art on cave walls in Sulawesi and Borneo. This art, which includes hand stencils and depictions of animals, dates to older than 40,000 years in age and is highly reminiscent of the cave art of comparable age found in Europe. 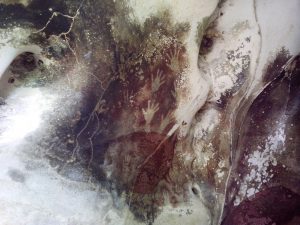 In December 2017, an archeologist from Indonesia discovered the hunting mural in a cave (now called Leang Bulu’ Sipong 4) in the southern part of Sulawesi. The panel presents the viewer with an ensemble of pigs and small buffalo (called anoas), endemic to Sulawesi. Most intriguing about the artwork is the depiction of smaller human-like figures with animal features such as tails and snouts. In some instances, the figures appear to be holding spears and ropes. Scholars refer to these human-animal depictions as therianthropes. 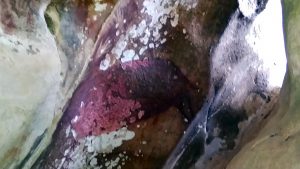 Figure 4: Illustration of a Pig Deer
Found in a Cave in Southern
Sulawesi. Credit: Wikipedia.

Recently, archeologists have developed a new approach to date cave art. This method measures the levels of uranium and thorium in calcite deposits that form on top of the artwork. Calcite is continuously deposited on cave walls due to hydrological activity in the cave. As water runs down the cave walls, calcium carbonate precipitates onto the cave wall surface. Trace amounts of radioactive uranium are included in the calcium carbonate precipitates. This uranium decays into thorium, hence the ratio of uranium to thorium provides a measure of the calcite deposit’s age and, in turn, yields a minimum age for the artwork.

To be clear, this dating method has been the subject of much controversy. Some archeologists argue that the technique is unreliable because the calcite deposits are an open system. Once the calcite deposit forms, water will continue to flow over the surface. The water will solubilize part of the calcite deposit and along with it the trace amounts of uranium and thorium. Thus, because uranium is more soluble than thorium we get an artificially high level of thorium. So, when the uranium-thorium ratio is measured, it may make it appear as if the cave art is older than it actually is.

To ensure that the method worked as intended, the researchers only dated calcite deposits that weren’t porous (which is a sign that they have been partially re-dissolved) and they made multiple measurements from the surface of the deposit toward the interior. If this sequence of measurements produced a chronologically consistent set of ages, the researchers felt comfortable with the integrity of the calcite samples. Using this method, the researchers determined that the cave painting of the pig and buffalo hunt dates to older than 43,900 years.

Corroborating evidence gives the archeologists added confidence in this result. For example, the discovery of archeological finds in the Sulawesi cave site that were independently dated indicate that modern humans were in the caves between 40,000 to 50,000 years ago, in agreement with the measured age of the cave art.

The research team also noted that the animal and the therianthropes in the mural appear to have been created at the same time. This insight is important because therianthropes don’t appear in the cave paintings found in Europe until around 10,000 years ago. This observation means that it is possible that the therianthropes could have been added to the painting millennia after the animals were painted onto the cave wall. However, the researchers don’t think this is the case for at least three reasons. First, the same artistic style was used to depict the animals and therianthropes. Second, the technique and pigment used to create the figures is the same. And third, the degree of weathering is the same throughout the panel. None of these features would be expected if the therianthropes were a late addition to the mural.

The researchers find the presence of therianthropes in 44,000+ year-old cave art significant. It indicates that humans in Sulawesi not only possessed the capacity for symbolism, but, more importantly, had the ability to conceive of things that did not exist in the material world. That is to say, they had a sense of the supernatural.

Some archeologists believe that the cave art reflects shamanic beliefs and visions. If this is the case, then it suggests that the therianthropes in the painting may reflect spirit animal helpers who ensured the success of the hunt. The size of the therianthropes supports this interpretation. These animal-human hybrids are depicted as much smaller than the pigs and buffalo. On the island of Sulawesi, both the pig and buffalo species in question were much smaller than modern humans.

Because this artwork depicts a hunt involving therianthropes, the researchers see rich narrative content in the display. It seems to tell a story that likely reflected the mythology of the Sulawesi people. You could say it’s a comic book on a cave wall.

Relationship between Cave Art in Europe and Asia

Cave art in Europe has been well-known and carefully investigated by archeologists and anthropologists for nearly a century. Now archeologists have access to a growing archeological record in Asia.

Art found at these sites is of the same quality and character as the European cave art. However, it is older. This discovery means that modern humans most likely had the capacity to make art even before beginning their migrations around the world from out of Africa (around 60,000 years ago).

As noted, the discovery of therianthropes at 44,000+ years in age in Sulawesi is intriguing because these types of figures don’t appear in cave art in Europe until around 10,000 years ago. But archeologists have discovered the lion-man statue in a cave site in Germany. This artifact, which depicts a lion-human hybrid, dates to around 40,000 years in age. In other words, therianthropes were part of the artwork of the first Europeans. It also indicates that modern humans in Europe had the capacity to envision imaginary worlds and held belief in a supernatural realm.

Capacity for Art and the Image of God

For many people, our ability to create and contemplate art serves as a defining feature of humanity—a quality that reflects our capacity for sophisticated cognitive processes. So, too, does our capacity for storytelling. As humans, we seem to be obsessed with both. Art and telling stories are manifestations of symbolism and open-ended generative capacity. Through art (as well as music and language), we express and communicate complex ideas and emotions. We accomplish this feat by representing the world—and even ideas—with symbols. And, we can manipulate symbols, embedding them within one another to create alternate possibilities.

As a Christian, I believe that our capacity to make art and to tell stories is an outworking of the image of God. As such, the appearance of art (as well as other artifacts that reflect our capacity for symbolism) serves as a diagnostic for the image of God in the archeological record. That record provides the means to characterize the mode and tempo of the appearance of behavior that reflect the image of God. If the biblical account of human origins is true, then I would expect that artistic expression should be unique to modern humans and should appear at the same time that we make our first appearance as a species.

So, when did art (and symbolic capacity) first appear? Did art emerge suddenly? Did it appear gradually? Is artistic expression unique to human beings or did other hominins, such as Neanderthals, produce art too? Answers to these questions are vital to our case for human exceptionalism and, along with it, the image of God.

When Did the Capacity for Art First Appear?

Again, the simultaneous appearance of cave art in Europe and Asia indicates that the capacity for artistic expression (and, hence, symbolism) dates back to the time in prehistory before humans began to migrate around the world from out of Africa (around 60,000 years ago). This conclusion gains support from the recent discovery of a silcrete flake from a layer in the Blombos Cave that dates to about 73,000 years old. (The Blombos Cave is located around 150 miles east of Cape Town, South Africa.) A portion of an abstract drawing is etched into this flake.2

It is also significant that the globular brain shape of modern humans first appears in the archeological record around 130,000 years ago. As I have written about previously, globular brain shape allows expansion of the parietal lobe, which is responsible for many of our capacities:

In other words, the evidence indicates that our capacity for symbolism emerged at the time that our species first appears in the fossil record. Some archeologists claim that Neanderthals displayed the capacity for symbolism as well. If this claim proves true, then human beings don’t stand apart from other creatures. We aren’t special.

Did Neanderthals Have the Capacity to Create Art?

Claims of Neanderthal artistic expression abound in popular literature and appear in scientific journals. However, a number of studies question these claims. When taken as a whole, the evidence indicates that Neanderthals were cognitively inferior to modern humans.

So, when the evidence is considered as a whole, only human beings (modern humans) possess the capability for symbolism, open-ended generative capacity, and theory of mind—in my view, scientific descriptors of the image of God. The archeological record affirms the biblical view of human nature. It is also worth noting that the origin of our symbolic capacity seems to arise at the same time that modern humans appear in the fossil record, an observation I would expect given the biblical account of human origins.

Like the comics that intrigue me, this narrative resonates on a personal level. It seems as if the story told in the opening pages of the Old Testament is true.

Cave Art and the Image of God 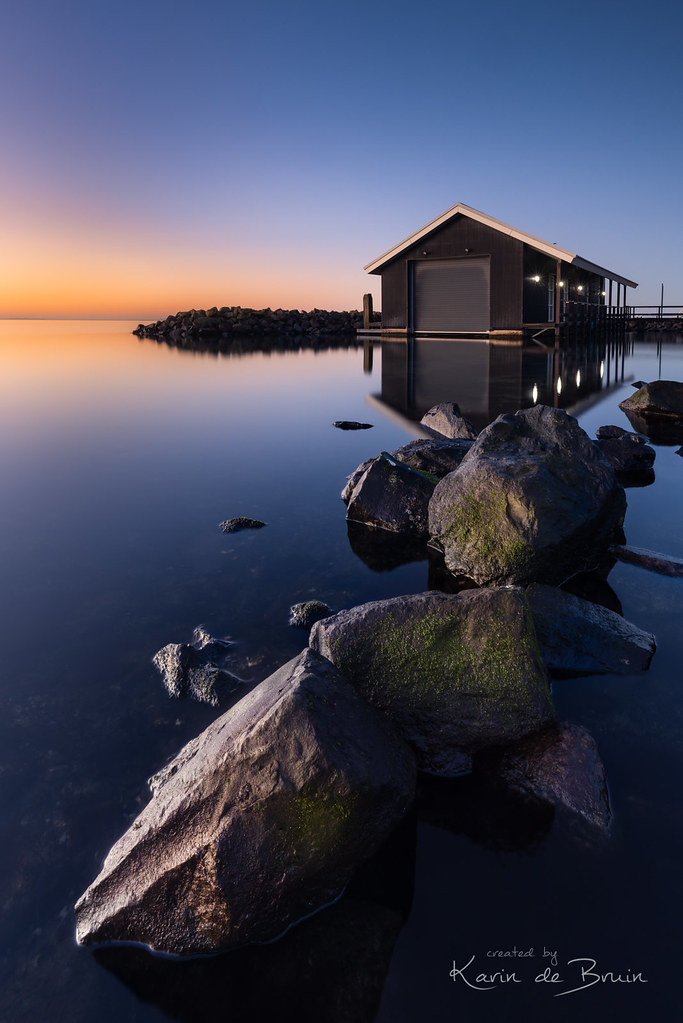 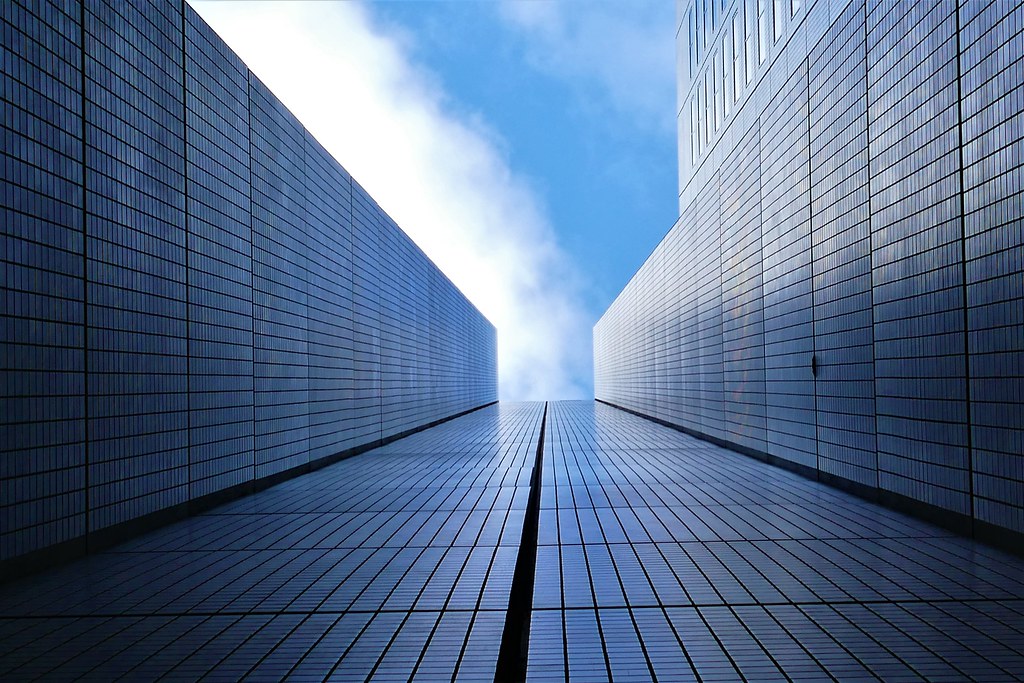 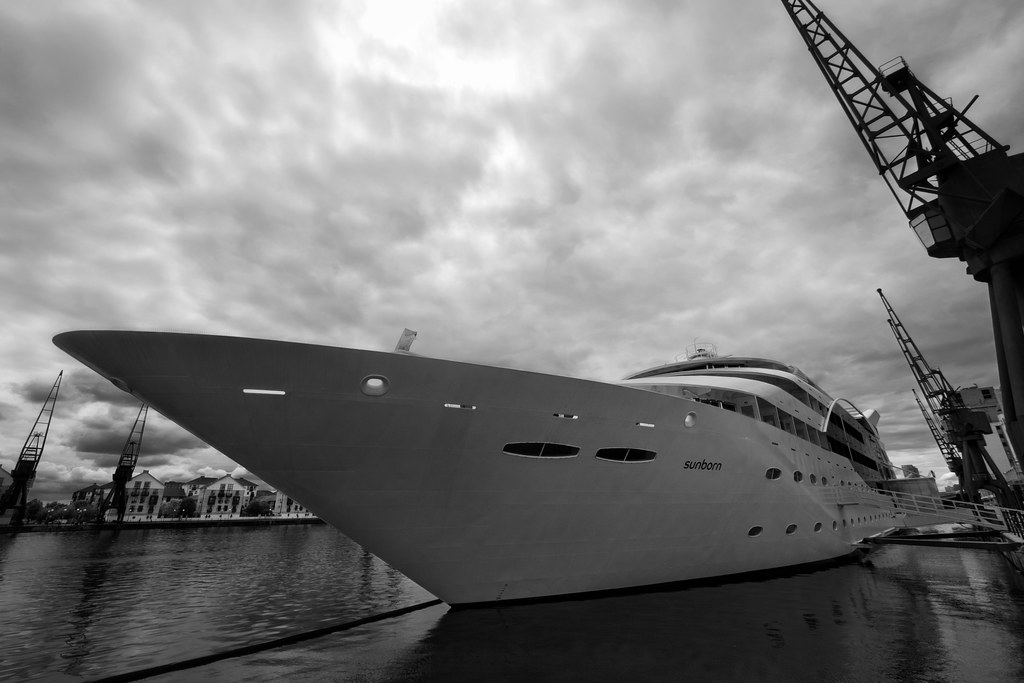 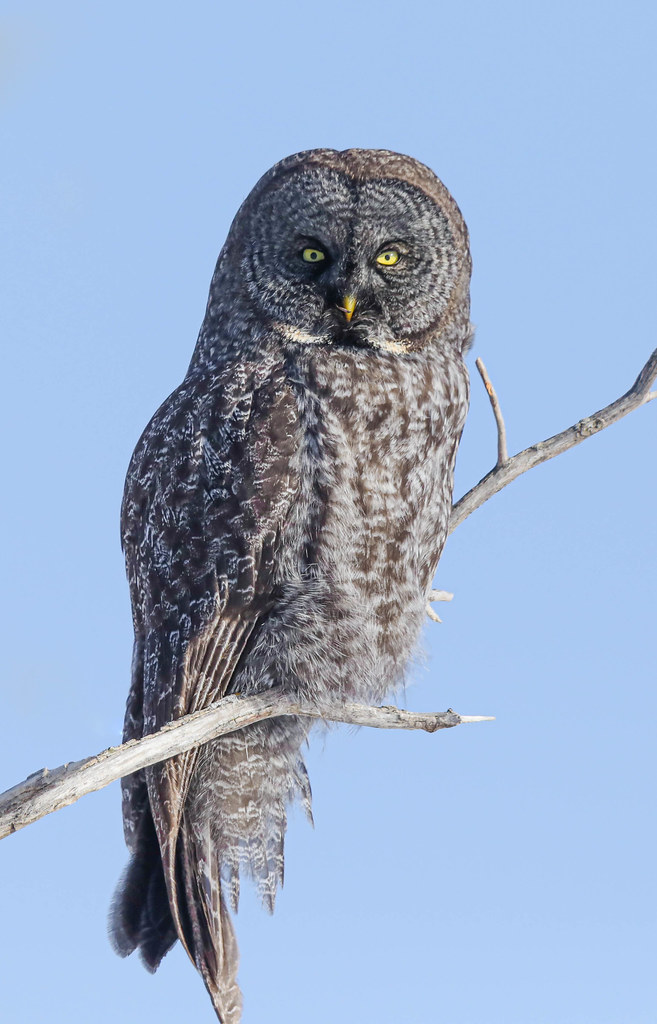