Are you a Marvel or a DC fan?

Do you like the Marvel superheroes better than those who occupy the DC universe? Or is it the other way around for you?

Even though you might prefer DC over Marvel (or Marvel over DC), over the years these two comic book rivals have often created superheroes with nearly identical powers. In fact, a number of Marvel and DC superheroes are so strikingly similar that their likeness to one another is obviously intentional.1

Here are just a few of the superheroes Marvel and DC have ripped off each other:

This same type of striking similarity is also found in biology. Life scientists have discovered countless examples of biological designs that are virtually exact replicas of one another. Yet, these identical (or nearly identical) designs occur in organisms that belong to distinct, unrelated groups (such as the camera eyes of vertebrates and octopi). Therefore, they must have an independent origin.

From an evolutionary perspective, it appears as if the evolutionary process independently and repeatedly arrived at the same outcome, time and time again. As evolutionary biologists Simon Conway Morris and George McGhee point out in their respective books, Life’s Solution and Convergent Evolution, identical evolutionary outcomes are a widespread feature of the biological realm.2 Scientists observe these repeated outcomes (known as convergence) at the ecological, organismal, biochemical, and genetic levels.

From my perspective, the widespread occurrence of convergent evolution is a feature of biology that evolutionary theory can’t genuinely explain. In fact, I see pervasive convergence as a failed scientific prediction—for the evolutionary paradigm. Recent work by a research team from Stanford University demonstrates my point.3

Essentially, chance governs biological and biochemical evolution at its most fundamental level. Evolutionary pathways consist of a historical sequence of chance genetic changes operated on by natural selection, which, too, consists of chance components. The consequences are profound. If evolutionary events could be repeated, the outcome would be dramatically different every time. The inability of evolutionary processes to retrace the same path makes it highly unlikely that the same biological and biochemical designs should appear repeatedly throughout nature.

The concept of historical contingency embodies this idea and is the theme of Stephen Jay Gould’s book Wonderful Life.4 To help illustrate the concept, Gould uses the metaphor of “replaying life’s tape.” If one were to push the rewind button, erase life’s history, and then let the tape run again, the results would be completely different each time.

For example, in a landmark study in 2002, two Canadian investigators simulated macroevolutionary processes using autonomously replicating computer programs, with the programs operating like digital organisms.5 These programs were placed into different “ecosystems” and, because they replicated autonomously, could evolve. By monitoring the long-term evolution of the digital organisms, the two researchers determined that evolutionary outcomes are historically contingent and unpredictable. Every time they placed the same digital organism in the same environment, it evolved along a unique trajectory.

The Origin of Echolocation

One of the most remarkable examples of convergence is the independent origin of echolocation (sound waves emitted from an organism to an object and then back to the organism) in bats (chiropterans) and cetaceans (toothed whales). Research indicates that echolocation arose independently in two different groups of bats and also in the toothed whales. 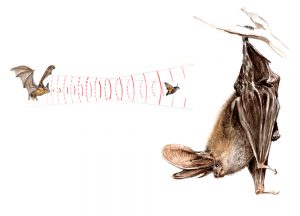 One reason why this example of convergence is so remarkable has to do with the way some evolutionary biologists account for the widespread occurrences of convergence in biological systems. Undaunted by the myriad examples of convergence, these scientists assert that independent evolutionary outcomes result when unrelated organisms encounter nearly identical selection forces (e.g., environmental, competitive, and predatory pressures). According to this idea, natural selection channels unrelated organisms down similar pathways toward the same endpoint.

But this explanation is unsatisfactory because bats and whales live in different types of habitats (terrestrial and aquatic). Consequently, the genetic changes responsible for the independent emergence of echolocation in the chiropterans and cetaceans should be distinct. Presumably, the evolutionary pathways that converged on a complex biological system such as echolocation would have taken different routes that would be reflected in the genomes. In other words, even though the physical traits appear to be identical (or nearly identical), the genetic makeup of the organisms should reflect an independent evolutionary history.

But this expectation isn’t borne out by the data.

In recent years, evolutionary biologists have developed interest in understanding the genetic basis for convergence. Specifically, these scientists want to understand the genetic changes that lead to convergent anatomical and physiological features (how genotype leads to phenotype).

Toward this end, a Stanford research team developed an algorithm that allowed them to search through entire genome sequences of animals to identify similar genetic features that contribute to particular biological traits.6 In turn, they applied this method to three test cases related to the convergence of:

In response to this finding, study author Gill Bejerano remarked, “These genes often control multiple functions in different tissues throughout the body, so it seems it would be very difficult to introduce even minor changes. But here we’ve found that not only do these very different species share specific genetic changes, but also that these changes occur in coding genes.”7

In other words, these results are not expected from an evolutionary standpoint. It is nothing short of amazing that genetic convergence would parallel phenotypic convergence.

On the other hand, these results make perfect sense from a creation model vantage point.

Instead of viewing convergent features as having emerged through repeated evolutionary outcomes, we could understand them as reflecting the work of a Divine Mind. In this scheme, the repeated origins of biological features equate to the repeated creations by an Intelligent Agent who employs a common set of solutions to address a common set of problems facing unrelated organisms.

Like the superhero rip-offs in the Marvel and DC comics, the convergent features in biology appear to be intentional, reflecting a teleology that appears to be endemic in living systems.