Football players aren’t dumb jocks—though they often have that reputation. Football is a physically demanding sport that requires strength, toughness, agility, and speed. But it is also an intellectually demanding game.

Mastering a playbook, understanding which plays work best for the various in-game scenarios, recognizing defenses and offenses, and adjusting on the fly require hours of study and preparation. Football really is a thinking person’s game. 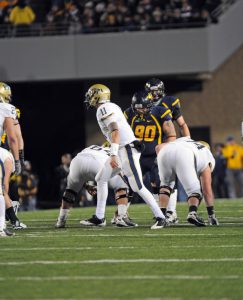 Figure 1: Quarterback Calling an Audible at the Line of Scrimmage. Image Credit: Shutterstock

In support of their claim, these scientists point to finds in the archaeological record that seemingly suggest these hominins were exceptional, just like modern humans. As a case in point, archaeologists have unearthed evidence for tar production at a site in Italy that dates to around 200,000 years in age. They interpret this discovery as evidence that Neanderthals were using tar as glue for hafting (fixing) flint spearheads to wooden spear shafts.1 Archaeologists have also unearthed spearheads with tar residue from two sites in Germany, one dating to 120,000 years in age and the other between 40,000 to 80,000 years.2 Because these dates precede the arrival of modern humans into Europe, anthropologists assume the tar at these sites was deliberately produced and used by Neanderthals.

Adhesives as a Signature for Superior Cognition

Anthropologists consider the development of adhesives as a transformative technology. These materials would have provided the first humans the means to construct new types of complex devices and combine different types of materials (composites) into new technologies. Because of this new proficiency, anthropologists consider the production and use of adhesives to be diagnostic of advanced cognitive capabilities such as forward planning, abstraction, and understanding of materials.

Production of adhesives from natural sources, even by the earliest modern humans, appears to have been a complex operation that required precise temperature control and the use of earthen mounds, or ceramic or metal kilns. In addition, birch bark needed to be heated in the absence of oxygen. Because the first large-scale production of adhesives usually centered around the dry distillation of birch and pine barks to produce tar and pitch, researchers have assumed that this technique is the only way to generate tar. 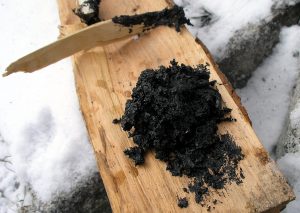 So, if Neanderthals were using tar as an adhesive, the reasoning goes, they must have been pretty impressive creatures.

In the summer of 2017 researchers from the University of Leiden published work that seemed to support this view.3 To address the question of how Neanderthals may have produced adhesives, these investigators conducted a series of experiments. They sought to learn how Neanderthals used the resources most reasonably available to them to obtain tar from birch bark through dry distillation.

By studying a variety of methods for dry distillation of tar from birch in a laboratory setting, the research team concluded that Neanderthals could have produced tar from birch bark if they had used methods that were simple enough that they wouldn’t require precise temperature control during the distillation. Still, these methods are complex enough that the researchers concluded that for Neanderthals to pull off this feat, they must have had advanced cognitive abilities similar to those of modern humans.

Is Adhesive Production and Use Evidence for Neanderthal Exceptionalism?

At the time this work was reported, I challenged this conclusion by noting that the simplicity of these production methods argued against advanced cognitive abilities in Neanderthals, not for them.

Recent work by researchers from Germany affirms my skepticism. Their research challenges the view that adhesive production and use constitutes evidence for human exceptionalism.4 The team wondered if a simpler way to produce tar—even simpler than the methods identified by the research team from the University of Leiden— exists. They also wondered if it was possible to produce tar in the presence of oxygen.

From their work, they discovered that burning birch bark (or branches from a birch tree with the bark still attached) adjacent to a rock with a vertical or subvertical surface is a way to collect tar, which naturally deposits on the rock surface as the bark burns. In other words, tar can be produced accidentally, instead of deliberately. And once produced, it can be scraped from the rock surface.

Using analytical techniques (gas chromatography coupled to mass spectrometry) to characterize the chemical makeup of the tar produced by this simple method, the research team showed that it is comparable to the chemical composition of tars produced by sophisticated dry distillation methods under anaerobic conditions. Because of the simplicity of this method, the research team thinks that collecting tar deposits from burning birch on rocks is the most likely way that Neanderthals produced tar, if they intentionally produced it at all.

According to the research team, “The identification of birch tar at archaeological sites can no longer be considered as a proxy for human (complex, cultural) behavior as previously assumed. In other words, our finding changes textbook thinking about what tar production is a smoking gun of.”5

One other point merits consideration: A growing body of evidence indicates that Neanderthals did not master fire, but rather used it opportunistically. In other words, these creatures could not create fire, but did harvest wildfires. Evidence demonstrates that there were vast periods of time during Neanderthals’ tenure in Europe when wildfires were rare because of cold climatic conditions. During these periods, Neanderthals didn’t use fire.

Because fire is central to the dry distillation methods, for a significant portion of their time on Earth Neanderthals would have been unable to extract tar and use it for hafting. Perhaps this factor explains why recovery of tar from Neanderthal sites is so rare. And could it be that Neanderthals were not intentionally producing tar? Instead, did tar just happen to collect on rock surfaces as a consequence of burning birch branches when these creatures were able to harvest fire?

What Difference Does It Make?

One of the most important ideas taught in Scripture is that human beings uniquely bear God’s image. As such, every human being has immeasurable worth and value. And because we bear God’s image, we can enter into a relationship with our Maker.

Yet, claims that Neanderthals are cognitive equals to modern humans fail to withstand scientific scrutiny, time and time again, as this latest study demonstrates. It is unlikely that any of us will see a Neanderthal run onto the football field anytime soon.

Neanderthals Did Not Master Fire

Differences in Human and Neanderthal Brains