As a graduate student and a postdoc, I spent countless hours in the lab doing research. Part of my work involved performing biochemical assays—laboratory procedures designed to measure the activities of biomolecules and biochemical systems.

To get our assays to work properly, we had to carefully design and optimize each test before executing it with exacting precision in the laboratory. Optimizing these assays was no easy feat. It could take weeks of painstaking effort to get the protocols just right.

My experiences working in the lab taught me some important lessons that I carry with me today as a Christian apologist. One of these lessons has to do with optimization. Optimized systems don’t just happen, whether they are laboratory procedures, manufacturing operations, or well-designed objects or devices. Instead, optimization results from the insights and efforts of intelligent agents, and therefore serves as a sure indicator of intelligent design.

As it turns out, nearly every biochemical system appears to be highly optimized. For me, this fact indicates that life stems from a Mind. And as life scientists continue to characterize biochemical systems, they keep discovering more and more examples of biochemical optimization, as recent work by a large team of collaborators working at the Earth-Life Science Institute (ELSI) in Tokyo, Japan, illustrates.1

These researchers uncovered more evidence that the twenty amino acids encoded by the genetic code possess the optimal set of physicochemical properties. If not for these properties, it would not be possible for the cell to build proteins that could support the wide range of activities required to sustain living systems. This insight gives us important perspective into the structure-function relationships of proteins. It also has theological significance, adding to the biochemical case for a Creator.

Before describing the ELSI team’s work and its theological implications, a little background might be helpful for some readers. For those who are familiar with basic biochemistry, just skip ahead to Why These Twenty Amino Acids?

Proteins are large, complex molecules that play a key role in virtually all of the cell’s operations. Biochemists have long known that the three-dimensional structure of a protein dictates its function. Because proteins are such large, complex molecules, biochemists categorize protein structure into four different levels: primary, secondary, tertiary, and quaternary structures. 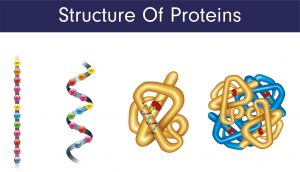 The building blocks of proteins are amino acids. These compounds are characterized by having both an amino group and a carboxylic acid bound to a central carbon atom. Also bound to this carbon are a hydrogen atom and a substituent that biochemists call an R group. 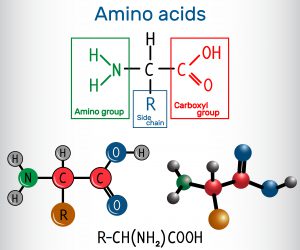 Close to 150 amino acids are found in proteins. But only 19 amino acids (plus 1 imino acid, called proline) are specified by the genetic code. Biochemists refer to these 20 as the canonical set. 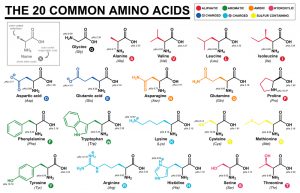 A protein’s primary structure forms when amino acids react with each other to form a linear chain, with the amino group of one amino acid combining with the carboxylic acid of another to form an amide linkage. (Sometimes biochemists call the linkage a peptide bond.)

Why These Twenty Amino Acids?

Research has revealed that the set of amino acids used to build proteins is universal. In other words, the proteins found in every organism on Earth are made up of the same canonical set.

Biochemists have long wondered: Why these 20 amino acids?

In the early 1980s biochemists discovered that an exquisite molecular rationale undergirds the amino acid set used to make proteins.2 Every aspect of amino acid structure has to be precisely the way it is for life to be possible. On top of that, biochemists concluded that the set of 20 amino acids possesses the “just-right” physical and chemical properties that evenly and uniformly vary across a broad range of size, charge, and hydrophobicity (water resistance). In fact, it appears as if the amino acids selected for proteins seem to form a uniquely optimal set of 20 amino acids compared to random sets of amino acids.3

With these previous studies as a backdrop, the ELSI investigators wanted to develop a better understanding of the optimal nature of the universal set of amino acids used to build proteins. They also wanted to gain insight into the origin of the canonical set.

To do this they used a library of 1,913 amino acids (including the 20 amino acids that make up the canonical set) to construct random sets of amino acids. The researchers varied the set sizes from 3 to 20 amino acids and evaluated the performance of the random sets in terms of their capacity to support: (1) the folding of protein chains into three-dimensional structures; (2) protein catalytic activity; and (3) protein solubility.

They discovered that if a random set of amino acids included even a single amino acid from the canonical set, it dramatically out-performed random sets of the same size without any of the canonical amino acids. Based on these results, the researchers concluded that each of the 20 amino acids used to build proteins stands out, possessing highly unusual properties that make them ideally suited for their biochemical role, confirming the results of previous studies.

An Evolutionary Origin for the Canonical Set?

The ELSI researchers believe that—from an evolutionary standpoint—these results also shed light as to how the canonical set of amino acids emerged. Because of the unique adaptive properties of the canonical amino acids, the researchers speculate that “each time a CAA [canonical amino acid] was discovered and embedded during evolution, it provided an adaptive value unusual among many alternatives, and each selective step may have helped bootstrap the developing set to include still more CAAs.”4

In other words, the researchers offer the conjecture that whenever the evolutionary process stumbled upon one of the amino acids in the canonical set and incorporated it into nascent biochemical systems, the addition offered such a significant evolutionary advantage that it became instantiated into the biochemistry of the emerging cellular systems. Presumably, as this selection process occurred repeatedly over time, members of the canonical set would be added, one by one, to the evolving amino acid set, eventually culminating in the full canonical set.

On the surface, this evolutionary explanation is not unreasonable. But more careful consideration of the idea raises concerns. For example, just because a canonical amino acid becomes incorporated into a set of amino acids and improves its adaptive value doesn’t mean that the resulting set of amino acids could produce the range of proteins with the solubility, foldability, and catalytic range needed to support life processes. Intuitively, it seems to me as a biochemist, that there must be a threshold for the number of canonical amino acids in any set of amino acids for it to have the range of physicochemical properties needed to build all the proteins needed to support minimal life.

I also question this evolutionary scenario because some of the amino acids that optimize smaller sets would not have been the ones present initially on the early Earth because they cannot be made by prebiotic reactions. Instead, many of the amino acids that optimize smaller sets can only be generated through biosynthetic routes that must have emerged much later in any evolutionary scenario for the origin of life.5 This limitation also means that the only way for some of the canonical amino acids to become incorporated into the canonical set is that multi-step biosynthetic routes for those amino acids evolved first. But if the full canonical set isn’t available, then it is questionable if the proteins needed to catalyze the biosynthesis of these amino acid would exist, resulting in a chicken-and-egg dilemma.

In light of these concerns, is there a better explanation for the highly optimized canonical set of amino acids?

Optimality of the universal set of protein amino acids finds explanation if life stems from a Creator’s handiwork. As noted, optimization is an indicator of intelligent design, achieved through foresight and preplanning. Optimization requires inordinate attention to detail and careful craftsmanship. By analogy, the optimized biochemistry epitomized by the amino acid set that makes up proteins rationally points to the work of a Creator.

Is There a Biochemical Anthropic Principle?

This discovery also leads to another philosophical implication: It lends support to the existence of a biochemical anthropic principle.

The ELSI researchers speculate that no matter the starting point in the evolutionary process, the pathways will all converge at the canonical set of amino acids because of the acids’ unusual adaptive properties. In other words, the amino acids that make up the universal set of protein-coding amino acids are not the outworking of an historically contingent evolutionary process, but instead seem to be fundamentally prescribed by the laws of nature. To put it differently, it appears as if the canonical set of amino acids has been preordained in some way.6 One of the study’s authors, Rudrarup Bose, suggests that “Life may not be just a set of accidental events. Rather, there may be some universal laws governing the evolution of life.”7

Though I prefer to see the origin of life as a creation event, it is important to recognize that even if one were to adopt an evolutionary perspective on life’s origin, it looks as if a Mind is responsible for jimmy-rigging the process to a predetermined endpoint. It looks as if a Mind purposed for life to be present in the universe and structured the laws of nature so that, in this case, the uniquely optimal canonical set of amino acids would inevitably emerge.

Along these lines, it is remarkable to think that the canonical set of amino acids has the precise properties needed for life to exist. This “coincidence” is eerie, to say the least. As a biochemist, I interpret this coincidence as evidence that our universe has been designed for a purpose. It is provocative to think that regardless of one’s perspective on the origin of life, the evidence converges toward a single conclusion: namely that life manifests from an intelligent agent—God.

The Optimality of Biochemical Systems