If you find yourself in need of directions when traveling through New England and you ask a local for help, he or she just might reply, “You can’t get there from here.” As you can imagine, these aren’t welcome words, particularly when all you want to do is make your way to your destination.

Unfortunately, the same thing could be said to biologists trying to discover the evolutionary route that led to the emergence of complex, eukaryotic cells. No matter the starting point, it seems as if you just can’t get there from here.

This frustration becomes most evident as evolutionary biologists try to account for the biochemical makeup of the membranes found in eukaryotic cells. In my opinion, this struggle is not just an inconvenient detour. As the following paragraphs show, obstacles line the roadway, ultimately leading to a dead end that exposes the shortcomings of the endosymbiont hypothesis—a cornerstone idea in evolutionary biology.

Most biologists believe that the endosymbiont hypothesis stands as the best explanation for the origin of complex cells. According to this hypothesis, complex cells originated when symbiotic relationships formed among single-celled microbes after free-living bacterial and/or archaeal cells were engulfed by a “host” microbe.

Evidence for the Endosymbiont Hypothesis
1. Most of the evidence for the endosymbiont hypothesis centers around mitochondria and their similarity to bacteria. Mitochondria are about the same size and shape as a typical bacterium and have a double membrane structure like gram-negative cells. These organelles also divide in a way that is reminiscent of bacterial cells.

Evolutionary biologists have also developed other lines of evidence in support of the endosymbiont hypothesis. For example, biochemists have discovered that the genetic core (DNA replication and the transcription and translation of genetic information) of eukaryotic cells resembles that of the archaea. This similarity suggests to many biologists that a microbe belonging to the archaeal domain served as the host cell that gave rise to eukaryotic cells.

Life scientists think they may have determined the identity of that archaeal host. In 2015, a large international team of collaborators reported the discovery of Lokiarchaeota, a new phylum belonging to the archaea. This phylum clusters with eukaryotes on the evolutionary tree. Analysis of the genomes of Lokiarchaeota identifies a number of genes involved in membrane-related activities, suggesting that this microbe may well have possessed the ability to engulf other microbes.1 At this point, it looks like “you can get there from here.”

Despite this seemingly compelling evidence, the evolutionary route to the first eukaryotic cells is littered with potholes. I have written several articles detailing some of the obstacles. (See Challenges to the Endosymbiont Hypothesis in the Resources section.) Also, a divide on the evolutionary roadway called the lipid divide compounds the problem for the endosymbiont hypothesis. 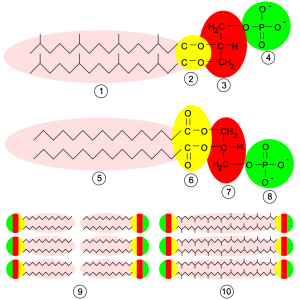 In light of the lipid divide and the evidence that seemingly indicates that the endosymbiotic host cell likely belonged to Lokiarchaeota, it logically follows that the membrane composition of eukaryotic cells should be archaeal-like. But, this expectation is not met and the evolutionary route encounters another pothole. Instead, the cell membranes of eukaryotic cells closely resemble bacterial membranes.

One way to repair the roadway is to posit that during the evolutionary process that led to the emergence of eukaryotic cells, a transition from archaeal-like membranes to bacterial-like membranes took place. In fact, supporting evidence comes from laboratory studies demonstrating that stable bilayers can form from a mixture of bacterial and archaeal phospholipids, even though the lipids from the two sources have opposite stereochemistry.

Evolutionary biologists Purificación López-García and David Moreira question if evidence can be marshaled in support of this scenario for two reasons.2 First, mixing of phospholipids in the lab is a poor model for cell membranes that function as a “dynamic cell-environment interface.”3

In other words, these two scientists express serious doubts about the biochemical viability of a transitional stage between archaeal membranes. In light of these obstacles, López-García and Moreira write, “The archaea-to-bacteria membrane shift remains the Achilles’ heel for these models [that propose an archaeal host for endosymbionts].”4

In other words, you can’t get there from here.

In the midst of this uncertain evolutionary route, a recent study by investigators from the Netherlands seems to point the way toward the evolutionary origin of eukaryotic membranes.5 Researchers screened the Lokiarchaeota genome for enzymes that would take part in phospholipid synthesis with the hope of finding clues about how this transition may have occurred. They conclude that this group of microbes could not make l-glycerol-1-phosphate (a key metabolic intermediate in the production of archaeal phospholipids) because it lacked the enzyme glycerol-1-phosphate dehydrogenase (G1PDH). They also discovered evidence that suggests that this group of microbes could make fatty acids and chemically attach them to sugars. The researchers argue that Lokiarchaeota could make some type of hybrid phospholipid with features of both archaeal and bacterial phospholipids.

The team’s approach to understanding how evolutionary processes could bridge the lipid divide and account for the origin of eukaryotic membranes is clever and inventive, to be sure. But it is far from convincing for at least four reasons.

1. Absence of evidence is not evidence of absence, as the old saying goes. Just because the research team didn’t find the gene for G1PDH in the Lokiarchaeota genetic material doesn’t mean this microbe didn’t have the capacity to make archaeal-type phospholipids. Toward this end, it is important to note that researchers have not cultured any microbe that belongs to this group organisms. The group’s existence is inferred from metagenomic analysis, which involves isolating small fragments of DNA from the environment (in this case a hydrothermal vent system in the Atlantic Ocean, called Loki’s Castle) and stitching them together into a genome. The Lokiarchaeota “genome” is low quality (1.4-fold coverage) and incomplete (8 percent of the genome is missing). Around one-third (32 percent) of the genome codes for proteins with unknown function. Could it be that an enzyme capable of generating l-glycerol-1-phosphate exists in the mysterious third of the genome? Or in the missing 8 percent?

3. Though the researchers found evidence that Lokiarchaeota had the capacity to make fatty acids, some of the genes required for the process seem to have been acquired by these microbes via horizontal gene transfer with genetic material from bacteria. (It should be noted that 29 percent of the Lokiarchaeota genome comes from the bacteria.) It is not clear when Lokiarchaeota acquired these genes and, therefore, if this metabolic capability has any bearing on the origin of eukaryotes.

4. The researchers present no evidence that Lokiarchaeota possessed the protein machinery that would chemically attach isoprenoid lipids to d-glycerol-3-phosphate via ether linkages.

Thus, the only way to establish Lokiarchaeota membranes as a transitional evolutionary pathway between those found in Archaea and Bacteria is to perform chemical analysis of its membranes. At this juncture, such analysis is impossible to perform because no one has been able to culture Lokiarchaeota. In fact, other evidence suggests that this group of microbes possessed archaeal-type membranes. Researchers have recovered archaeal lipids in the sediments surrounding Loki’s Castle, but they have not recovered bacterial-like lipids.

Given these problems, could it be that the host microbe for the endosymbiont was a member of Bacteria, not Archaea? While this model would solve the problem of the lipid divide, it leaves unexplained the similarity between the genetic core of eukaryotes and the Archaea. Nor does it account for the grouping of eukaryotes with the Archaea.

It doesn’t look like you can get there from here, either.

Evolutionary biologists Jonathan Lombard, Purificación López-García and David Moreira sum things up when they write, “The origin of eukaryotic membranes is a problem that is rarely addressed by the different hypotheses that have been proposed to explain the emergence of eukaryotes.”6 Yet, until this problem is adequately addressed, the evolutionary route to eukaryotes will remain obscure and the endosymbiont hypothesis noncompelling.

In light of this challenge and others, maybe a better way to make sense of the origin of eukaryotic cells is to view them as the Creator’s handiwork. For many scientists, it is a road less traveled, but it accounts for all of the data. You can get there from here.

Support for a Creation Model for the Origin of Eukaryotic Cells