In high school, I spent most Sunday mornings with my family gathered around the TV watching weekly reruns of the old Abbott and Costello movies. 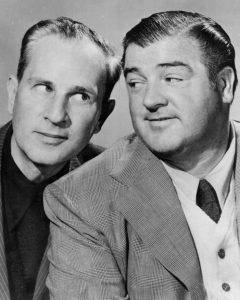 One of my favorite routines has the two comedians trying to help a woman get her parallel-parked car out of a tight parking spot. As Costello takes his place behind the wheel, Abbott tells him to “Go ahead and back up.” And of course, confusion and hilarity follow as Costello repeatedly tries to clarify if he is to “go ahead” or “back up,” finally yelling, “Will you please make up your mind!”

In an attempt to address this question, a research team from the University of Virginia (UVA) has added to the frustration, raising new challenges for evolutionary explanations for the origin of mitochondria. Their work threatens to drive the scientific community off the evolutionary route into the ditch when it comes to explaining the origin of eukaryotic cells.1

Most biologists believe that the endosymbiont hypothesis serves as the best explanation for the origin of complex cells.

According to this idea, complex cells originated when symbiotic relationships formed among single-celled microbes after free-living bacterial and/or archaeal cells were engulfed by a “host” microbe. 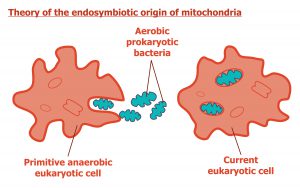 Much of the evidence for the endosymbiotic origin of mitochondria centers around the similarity between mitochondria and bacteria. These organelles are about the same size and shape as typical bacteria and have a double membrane structure like gram-negative cells. These organelles also divide in a way that is reminiscent of bacterial cells.

The Role of Mitochondria

Mitochondria serve cells in a number of ways, including:

Arguably one of the most important functions of mitochondria relates to their role in energy conversion. This organelle generates ATP molecules by processing the breakdown products of glycolysis through the tricarboxylic acid cycle and the electron transport chain.

Biochemists refer to ATP as a high-energy compound—it serves as an energy currency for the cell, and most cellular processes are powered by ATP. One way that ATP provides energy is through its conversion to ADP and an inorganic phosphate molecule. This breakdown reaction liberates energy that can be coupled to cellular activities that require energy. 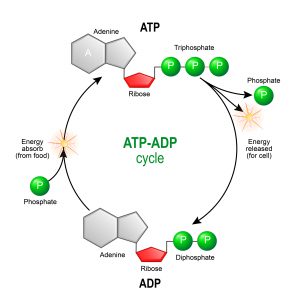 The enzyme complex ATP synthase, located in the mitochondrial inner membrane, generates ATP from ADP and inorganic phosphate, using a proton gradient generated by the flow of electrons through the electron transport chain. As ATP synthase generates ATP, it deposits this molecule in the innermost region of the mitochondria (called the matrix or the lumen).

In order for ATP to become available to power cellular processes, it has to be transported out of the lumen and across the mitochondrial inner membrane into the cytoplasm. Unfortunately, the inner mitochondrial membrane is impermeable to ATP (and ADP). In order to overcome this barrier, a protein embedded in the inner membrane called ATP/ADP translocase performs the transport operation. Conveniently, for every molecule of ATP transported out of the lumen, a molecule of ADP is transported from the cytoplasm into the lumen. In turn, this ADP is converted into ATP by ATP synthase.

Because of the importance of this process, copies of ATP/ADP translocase comprises 10% of the proteins in the inner membrane.

If this enzyme doesn’t function properly, it will result in mitochondrial myopathies.

The Problem ATP Transport Causes for The Endosymbiont Hypothesis

Two intertwined questions confronting the endosymbiont hypothesis relate to the evolutionary driving force behind symbiogenesis and the nature of pre-mitochondria.

Traditionally, evolutionary biologists have posited that the host cell was an anaerobe, while the endosymbiont was an aerobic microbe, producing ATP from lactic acid generated by the host cell. (Lactic acid is the breakdown product of glucose in the absence of oxygen).

But, as cell biologist Franklin Harold points out, this scenario has an inherent flaw. Namely, if the endosymbiont is producing ATP necessary for its survival from host cell nutrients, why would it relinquish some—or even all—of the ATP it produces to the host cell?

According to Harold, “The trouble is that unless the invaders share their bounty with the host, they will quickly outgrow him; they would be pathogens, not symbionts.”2

Harold sums up the problem this way: “Such a carrier would not have been present in the free-living symbiont but must have been acquired in the course of its enslavement; it cannot be called upon to explain the initial benefits of the association.”3

In other words, currently, there is no evolutionary explanation for why the ATP/ADP translocase in the mitochondrial inner membrane—a protein central to the role of mitochondria in eukaryotic cells—pumps ATP from the lumen to the cytoplasm.

This problem has led evolutionary biologists to propose two alternative models to account for the evolutionary driving force behind symbiogenesis: 1) the hydrogen hypothesis; and 2) the oxygen scavenger hypothesis.

The hydrogen hypothesis argues that the host cell was a methanogenic member of archaea that consumed hydrogen gas and the symbiont was a hydrogen-generating alpha proteobacteria.

The oxygen-scavenging model suggests that the engulfed cell was aerobic, and because it used oxygen, it reduced the amount of oxygen in the cytoplasm of the host cell, thought to be an anaerobe.

Today, most evolutionary biologists prefer the hydrogen hypothesis—in part because the oxygen scavenger model, too, has a fatal flaw. As Harold points out, “This [oxygen scavenger model], too, is dubious, because respiration generates free radicals that are known to be a major source of damage to cellular membranes and genes.”4

Operating within the evolutionary framework, these two investigators reconstructed the putative genome of pre-mitochondria using genes in the mitochondrial genome and genes from the nuclear genomes of organisms they believe were transferred to the nucleus during the process of symbiogenesis. (Genes that clustered with alphaproteobacterial genes were deemed to be of mitochondrial origin.)

Based on their reconstruction, they conclude that the original engulfed cell actually used its ATP/ADP translocase to import ATP from the host cell cytoplasm into its interior, exchanging the ATP for an ADP. This is the type of ATP/ADP translocase found in obligate intracellular parasites alive today.

According to the authors, this means that:

“Pre-mitochondrion [was] an ‘energy scavenger’ and suggests an energy parasitism between the endosymbiont and its host at the origin of the mitochondria. . . . This is in sharp contrast with the current role of mitochondria as the cell’s energy producer and contradicts the traditional endosymbiotic theory that the symbiosis was driven by the symbiont supplying the host ATP.”5

The fact that the engulfed cell was an obligate intracellular parasite not only brings a halt to the traditional version of the endosymbiont hypothesis, it flattens the tires of both the oxygen scavenger model and hydrogen hypothesis. According to Wang and Wu (the UVA investigators):

“Our results suggest that mitochondria most likely originated from an obligate intracellular parasite and not from a free-living bacterium. This has important implications for our understanding of the origin of mitochondria. It implies that at the beginning of the endosymbiosis, the bacterial symbiont provided no benefits whatsoever to the host. Therefore we argue that the benefits proposed by various hypotheses (e.g, oxygen scavenger and hydrogen hypotheses) are irrelevant in explaining the establishment of the initial symbiosis.”6

If the results of the analysis by the UVA researchers stand, it leaves evolutionary biologists with no clear direction when it comes to determining the evolutionary driving force behind the early stages of symbiogenesis or the evolutionary route to mitochondria.

In light of this uncertainty, can the origin of mitochondria, and hence eukaryotic cells, be better explained by a creation model? I think so, but for many scientists this is a road less traveled.

Challenges to the Endosymbiont Hypothesis:

In Support of a Creation Model for the Origin of Eukaryotic Cells:

ATP Production and the Case for a Creator: