In Latin it literally means, “somewhere else.”

Legal experts consider an alibi to be one of the most effective legal defenses available in a court of law because it has the potential to prove a defendant’s innocence. It goes without saying: if a defendant has an alibi, it means that he or she was somewhere else when the crime was committed.

As it turns out, paleoanthropologists have discovered that Neanderthals have an alibi, of sorts. Evidence indicates that they weren’t the ones to scratch up the floor of Gorham’s Cave.

Based on recent radiocarbon dates measured for samples from Bajondillo Cave (located on the southern part of the Iberian Peninsula—southwest corner of Europe), a research team from the Japan Agency for Marine-Earth Science and Technology and several Spanish institutions determined that modern humans made their way to the southernmost tip of Iberia around 43,000 years ago, displacing Neanderthals.1

Because Neanderthals disappeared from Iberia at that time, it becomes unlikely that they were responsible for hatch marks (dated to be 39,000 years in age) made on the floor of Gorham’s Cave on the island of Gibraltar. These scratches have been interpreted by some paleoanthropologists as evidence that Neanderthals possessed symbolic capabilities.

But how could Neanderthals have made the hatch marks if they weren’t there? Ladies and gentlemen of the jury: the perfect alibi. Instead, it looks as if modern humans were the culprits who marked up the cave floor. 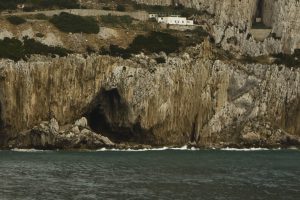 The Case for Neanderthal Exceptionalism

Two of the biggest questions in anthropology today relate to Neanderthals:

It is important to note that the case for Neanderthal symbolism is largely based on correlations between the archaeological and fossil records. Toward this end, some anthropologists have concluded that Neanderthals possessed symbolism because researchers have recovered artifacts (presumably reflecting symbolic capabilities) from the same layers that harbored Neanderthal fossils. Unfortunately, this approach is complicated by other studies that show that the cave layers have been mixed by either cave occupants (either hominid or modern human) or animals living in the caves. This mixing leads to the accidental association of fossil and archaeological remains. In other words, the mixing of layers raises questions about who the manufacturers of these artifacts were.

Because we know modern humans possess the capacity for symbolism, it is much more likely that modern humans, not Neanderthals, made the symbolic artifacts, in these instances. Then, only through an upheaval of the cave layers did the artifacts mix with Neanderthal remains. (See the Resources section for articles that elaborate this point.)

More often than not, archaeological remains are unearthed by themselves with no corresponding fossil specimens. This is the reason why understanding the timing of Neanderthals’ disappearance and modern humans’ arrival in different regions of Europe becomes so important (and why the two questions interrelate). Paleoanthropologists believe that if they can show that Neanderthals lived in a locale at the time symbolic artifacts were produced, then it becomes conceivable that these creatures made the symbolic items. This interpretation increases in plausiblity if no modern humans were around at the time.

Some researchers have argued along these lines regarding the hatch marks found on the floor of Gorham’s Cave.2 The markings were made in the bedrock of the cave floor. The layers above the bedrock date to between 30,000 and 39,000 years in age. Some paleoanthropologists argue that Neanderthals must have made the markings. Why? Because, even though modern humans were already in Europe by that time, these paleoanthropologists think that modern humans had not yet made their way to the southern part of the Iberian Peninsula. These same researchers also think that Neanderthals survived in Iberia until about 32,000 years ago, even though their counterparts in other parts of Europe had already disappeared. So, on this basis, paleoanthropologists conclude that Neanderthals produced the hatch marks and, thus, displayed symbolic capabilities. 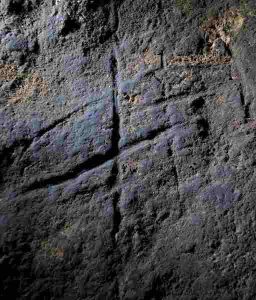 When Did Neanderthals Disappear from Iberia?

But recent work challenges this conclusion. The Spanish and Japanese team took 17 new radiocarbon measurements from layers of the Bajondillo Cave (located in southern Iberia, near Gorham’s Cave) with the hopes of precisely documenting the change in technology from Mousterian (made by Neanderthals) to Aurignacian (made by modern humans). This transition corresponds to the replacement of Neanderthals by modern humans elsewhere in Europe.

The researchers combined the data from their samples with previous measurements made at the site to pinpoint this transition at around 43,000 years ago—not 32,000 years ago. In other words, modern humans occupied Iberia at the same time they occupied other places in Europe. This result also means that Neanderthals had disappeared from Iberia well before the hatch marks in Gorham’s Cave were made.

Though claims of Neanderthal exceptionalism abound in the scientific literature and in popular science articles, the claims universally fail to withstand ongoing scientific scrutiny, as this latest discovery attests. Simply put, based on the archaeological record, there are no good reasons to think that Neanderthals displayed symbolism.

From my perspective, the case for Neanderthal symbolism seems to be driven more by ideology than actual scientific evidence.

It is also worth noting that comparative studies on Neanderthal and modern human brain structures also lead to the conclusion that humans displayed symbolism and Neanderthals did not. (See the Resources section for articles that describe this work in more detail.)

Why Does It Matter?

But, based on the latest scientific evidence, the verdict is in: modern humans are the only species to display the capacity for symbolism. In this way, scientific advance affirms that humans are exceptional in a way that aligns with the biblical concept of the image of God.

The Neanderthals’ alibi holds up. They weren’t there, but humans were. Case closed.

Reprinted with permission by the author
Original article at:
https://www.reasons.org/explore/blogs/the-cells-design/read/the-cells-design/2019/03/27/timing-of-neanderthals-disappearance-makes-art-claims-unlikely